I’ve mentioned, before, how I was a singer songwriter in Nashville back in 1992-93. I spent a lot of nights on stages around the city in what they called “songwriters in the round.” And I was almost always the only keyboard player on showcase nights.

One of those nights was more memorable to me. Because I shared an offbeat song of mine with a key signature played mostly on the black keys. And a guitar-playing songwriter, who sat behind me on stage, commented to the audience that he really liked it. He also pointed out how my song wasn’t played in the “usual country song keys.”

It was a particularly nice compliment to me because I thought his songs were great. So, I definitely respected his ear for composition and way with words.

It was a song about using roses to remember what’s important.

And the lyrics show how couples miss the mark when their selfishness kicks in. Of course, roses (or some other favorite flowers) are a beautiful peace offering. But they’re certainly no lasting substitute for what’s important. So, if you’re gonna buy flowers, be sure they include communication and a willingness to work on understanding what caused the issue.

But, back to my song. The host for that night’s songwriters in the round presentation agreed with the guy behind me. And he had me play it again. Probably means nothing to you. But it was mighty cool to me.

You can listen to the song in episode 136 of my podcast. And here are the lyrics. 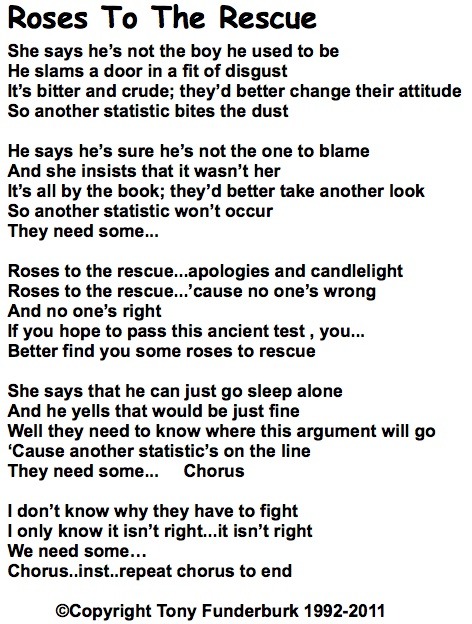 Get my Rhyme & Reason Podcast delivered right to your device. (also Fa-Ree)

Grab yourself an un-cool T-shirt

Or how about some music for believers, dreamers, and thinkers