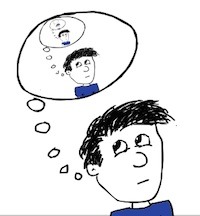 Like I’ve said so many times, I’m sort of kooky when it comes to words. Take words that start with “v” for example. I really like a lot of them. They really pop out at you. Words like vigor, vitality, and volume. You simply can’t say them without popping them off your lips.

So…when I decided, today, to share a poem I wrote back in 1976, I enjoyed the fact that it had the word “vivid” in it. This poem is loosely based on my experiences riding a train twice a year from Texas to Kansas and back when I was a young kid. My brother and I would go through the cars and use our vivid imaginations to while away the 18 hours we spent on the trip.

We’d dream up some scenarios involving a starship…or cross-country race…or any number of things. Those images we made up helped us to forget that our trip was a result of our parents’ divorce.

This isn’t about that. I don’t do sad stuff here on TonyFunderburk.com. So I’ll skip any of those other details and jump right into…

The bearded man on the pullman is a spy.
He’s recording all the secrets in his eye.
He has photographic memory,
A temperamental frame of mind,
And I’ll have him put in chains…at least I’ll try.
The name on his luggage is Francois,
So I think he’s probably loyal to the French.
Yes, he has a small mustache
And tiny, golden cuff links.
He’s a French spy, and the train is quite in trouble.
He’ll likely have the engineering blueprints,
And pictures of the engineer himself.
He’ll take a couple hostages if necessity demands.
He’s a spy, and we’re all lost in his hands.
“Oh please, Mom, I don’t want to sit down.
I’ll behave, if you’ll let me move around.
Let me play imagination till we get to the next station,
‘Cause I think that it’s the bearded man’s hometown.”