I can name that tune in 140 notes, so obviously I must be talking about “twitter music“. Yep, Twitter is apparently working on their own music streaming service. I wish them well. And this proves, yet again, that even though millions and millions and millions of people don’t want to pay for music, they can’t seem to live without it. 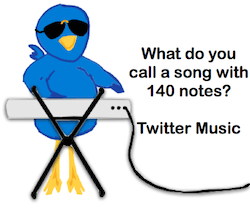 With every major player like Apple, Google, Facebook, and now Twitter putting so much emphasis on music, they must consider it a huge marketing plus. And I would have to guess they’re figuring out how to monetize the use of this music to their best advantage. Meanwhile musicians all over the globe keep figuring out more and more ways to give their work away.

Don’t misunderstand. I give away music, too. But I’m trying to think like Apple, Google, Facebook, and Twitter…how can I provide good, and sometimes free music, and thrive in this world of devalued art?

So…I’ll be looking at Twitter music with the same discernment I use on iTunes, Google Play, Facebook, and a host of others. If it works to be there, I’ll be there. If not, you can always find me writing, sharing, and selling music here on the good ol’ TonyFunderburk.com