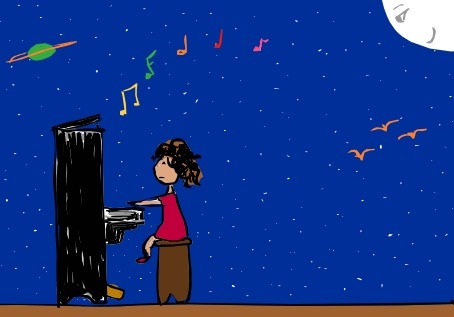 OK…I’m not tryin’ to say your kid’s life will be completely better because of music. And I’m not sayin’ your kid won’t have trials and tribulations in this life if he only listens to music.

But I am sayin’ your kid will have access to the ultimate imagination machine if she’s exposed to a good variety of true, melodic music.

Not just lots of rhyming words…

When kids can actually sing along to a melody with some catchy lyrics, their minds can develop word pictures. And that’s when the connection between music and imagination really kicks into overdrive. It’s like reading a good book…only it sticks in their heads much better because music is attached. That’s because their brains are the hardware for things like math, logic, design, and creative ability.

Take all those things…combine them with music…and imagination flourishes. Suddenly kids can not only imagine the wondrous possibilities, they can begin to actually create their dreams. Wow!

And think about it…do you know of any culture on the planet that doesn’t have some form of music? It’s often described as the universal language. I know that’s true. I’ve seen kids, who can’t even speak in whole sentences, dancing to music…in fact…whole families dancing to the same tune. It’s awesome when that happens. But it only happens when the music is actually FUN and has some redeeming quality.

That’s what I’m always trying to do…write fun music (for the whole family) with some sort of uplifting quality. Then moms and dads can enjoy dancing, carefree, with their kids… or watching their kids dance the funny dances kids do.

It keeps everyone in the same, safe and happy world…at least for a little while. That’s very cool…