In all my years as a singer songwriter I’ve maintained a general sense of optimism. 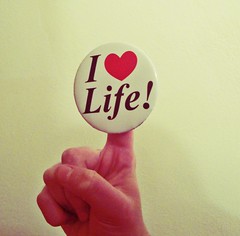 I wonder why so many singer songwriters nowadays are so full of angst.

Don’t misunderstand me…I’m not saying they don’t have a good reason. I’m just wondering why so many of them might have a “good reason” for being so full of darkness and angst. Do you suppose it’s the economy? Or the culture…c’mon, do we really need another cop show or vampire show with death and mayhem in nearly every frame? Could it be that it becomes a case of what’s-good-for-#1 Rockstar-is-good-enough-for-me? In other words…a pack forms behind the lead dog, and they go wherever he (or she) leads. Surely that’s not it.

I know a lot of pop icons would call me lame…or a sugar-coated-do-gooder…or another one of those Christians with his head in the sand and no grasp on reality.

But I really don’t care. I prefer to remain an optimist. After all…if the Christian message is true (and of course an overwhelming amount of evidence says it is), then I’m on the winning team. My Head Coach will lead my team to victory over all other opposing teams. The leader of my pack is not only the True Alpha male…He’s also the Omega Man! And that makes me sing with mostly hope and joy…not mere moaning and groaning.