A lot of people think the Bible has no joy and gladness.

They think it’s a “stuffy old book” full of “rules and regulations” nobody can keep. Young people are turned off by the very idea of what’s in the Bible, rather than actually open it and discover what it says for themselves. And that’s a shame because it talks so much about things like joy and gladness. 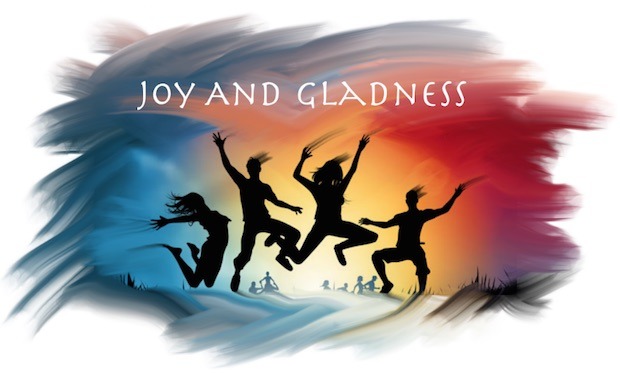 Sure, if you read the Old Testament, you can find a huge list of so-called rules and regulations. The Jews knew this as “The Torah” or “The Word” or “The Scriptures” and even as “The Law”.

God gave commandments to them through Moses. And then there were lots more laws added in Leviticus. Many were moral. Some were symbolic. But, yes, there were quite a few. And yes, they were difficult, impossible in fact, to keep. But that’s where joy and gladness come in. Huh? Read on…

Thousands of years of working and trying to keep “the law” proved that no one could do it. And so, their lamb sacrifices for sins continued…year after year, decade after decade, century after century. Until…

That word means “God with us”. And a little over 2000 years ago He was with us. God came to earth, took on human flesh, and “dwelt among us“. Maybe you’ve heard of the name He was given…Jesus. Yes? Well, do you know what He did? I mean, do you REALLY know what He did?

He, being God from eternity past and eternity forever, took on human flesh in order that perfect Spirit in human flesh could pay for sin, once and for all. And He did that for YOU! And me. In fact, for everyone who wants the freedom of eternal life. Jesus fulfilled the law, perfectly, because we couldn’t do it. And yet, committing no sin, no crime, no wrong…He was sentenced to death. First, horrible beatings and ridicule. Then, death on a splintery wooden cross with nails in His hands and feet.

So…what did this accomplish? I’m glad you asked.

The Law that the Jews had been attempting to keep all those centuries was finally kept and “fulfilled” in one, perfect man. And so…Jesus became the final sacrificial Lamb. Now, not only do the Jews receive a full pardon for sin if they’ll simply put their belief and trust in Him…so do all the rest of us. Every person gets to freely choose…eternal life with God in Heaven…or…eternal existence apart from Him.

Knowing you can live forever in paradise should bring great joy AND gladness to your heart, soul, body, and mind. Does it? If not, please let me know what’s going on. I’d like to help if I can.