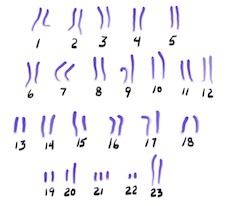 “What’s that? Your name is forty six chromosomes, too?! You must be kidding me. What? Oh…that’s not your name, but it’s you? I see. Hmm… that’s interesting. Tell me more.” —–

I hope you don’t mind me starting off this article with a little childlike conversation, but there’s something so important in those little squiggly lines you see in the picture, and I’d like to show you how simple it really is.

Now, here’s a vitally important part to this information that’s completely ignored and even shunned by so-called “pro choice” advocates. Those forty six chromosomes are all present from the moment of conception. In other words…the moment a human sperm fertilizes a human egg, you have a brand new human. Everything you need, to be you, is found in those forty six chromosomes at conception. Am I making this clear?

Your chromosomes determine whether you’ll be tall or short, portly or lean, blue eyes and blond hair or green eyes and brown hair, rich or poor.

Just kidding on the “rich or poor” part. You get to work on that yourself when you’re old enough.

Since science actually agrees with God on this subject (whether some scientists want to admit it or not), you’d think it would be a no-brainer. Case closed. End of discussion. Verdict reached. A human embryo is a human.

But…sadly…that’s not the case. Too many people, swept up in their own selfishness, ignore the facts. You’re a person, and you are completely who you will be, from the moment of conception. And…please…let’s not get into semantics over when the moment of conception is. If we can’t agree on that moment…can’t we at least agree not to kill IT until after we know what IT is?

Here’s a few lines I’ve been working on to show a little mathematical equation I came up with. Let me know what you think.