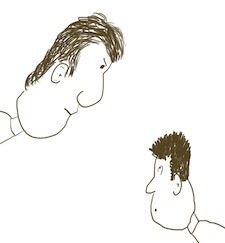 Have you ever met or had to deal with someone who had what you might call a “condescending attitude”? Well, if so, I have some good news for you.

A condescending attitude from a human being is just that…an attitude. Do you realize no other human being on the planet can actually condescend to you? Or to anyone else for that matter. No matter what the perception is in this world, you are equal in value to anyone.

Notice I said “importance”…not position. Of course, if you work for someone, their position is higher than yours. After all, they hired you. They pay you. But all you would need to reverse that is a change of position. Hire yourself and run your own business. All this has nothing to do with your importance. You’re a created being…created in the image and likeness of God.

I hope you get the full impact of that. I’m talking about God. The One who spoke words and the whole universe sprang into existence. And He didn’t create any other living thing on the planet in His image and likeness. Only humans. And He gave us “dominion” over all the other creatures. That makes you pretty unique. Don’t you agree?

Well, in a way, you might say God had a condescending attitude when He lowered Himself to become a man and take the punishment for our sins. He had always existed, in eons past, as a non-corporeal or spirit being. That’s a vastly superior state of existence without the constraints of flesh and bone.

Still, He was willing to live as we live, deal with the temptations we deal with, and even die a horrible death for something He didn’t do…all so we could avoid the consequences of our sins…eternal death.

In other words, God made a way for you and me to have eternal life. He had his Son condescend from His position as the untouchable God and became a man who could be touched. He became Jesus.

I encourage you to take a little time to read the accounts of how Jesus died. It’s pretty hard to take, but it fully shows how completely He loves you. Once you take the information into your heart, I’m convinced you’ll be eternally grateful for God’s condescending attitude.

Here’s a song I wrote about it. It’s called “Consequential Servitude”.

God looked down on me…He knew I was wrong
Usurped my position I held for so long
Yeah, He just took over…where my brain left off
He knew it was risky…He knew theyâ€™d all scoff
Sometimes Iâ€™m so stupid, and so often blind…
Trade reason for feelings; mistakes underlined

And so again; I behold the outer man
Through Godâ€™s condescending attitude,
And I defer to the perfect Architect
And this consequential servitude

There were no incantations, no hallelujah chorus
He succumbed to His detractors; withstood an inquisition…
And then commended His spirit, relinquished His position,
And then He died a death that was for us!