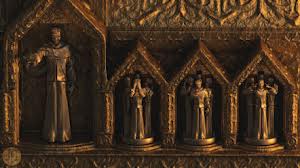 I remember an ongoing study, in a high school English class, on the implications, metaphors, and similes found in John Keats’ poem, “Ode On A Grecian Urn“. It wasn’t a simple class on which words rhymed and which did not. And I remember my fertile, young poet’s mind wanted to peer behind statues and doors for the hidden meanings.

If you have a few minutes, click that link, above, and read the poem. It’s written in the English style found in the early 19th century, so it doesn’t read like modern American poetry. But that, in itself, can bring a new twist to your poetry reading if you give it a shot.

Keats wrote about all the everyday life he found on a marble Grecian urn. One point of irony, right from the start, is how urns were so often used to store the ash remains of loved ones. So, to write about the life captured in stone on an urn filled with only the remains of a life…well…see what I mean?

I love the lilting descriptions. One of my favorites is “pipe to the spirit ditties of no tone”. Now, ponder that for a moment. Better yet…go read the poem so you can put it in perspective. It was poems like this “Ode” that influenced a lot of my own writing while I was still in high school and for a year or so afterwards.

Then, I began to find my own voice and shed the more formal style for what I hope is my own Tony tone. But here’s a short sonnet I wrote while still mildly under the influence of “proper English” and a desire to be “poetic”. I was walking around the grounds of a museum, looking behind statues and doors and trees, and I wrote…

A Sonnet For The Statues

I saw the wooden statues in the garden.
They stood there, lifeless, with flowers all around.
This scene presented itself to me, and I gazed on.
What a simple sight, but what a pretty one.
One that you’d think poets write about,
And soon I felt as if I was a statue
Destined to stand underneath the clouds.
I think I could learn to enjoy
The feel of flowers growing all round my feet.
But I wonder what it would be like
To never know the feeling of a heartbeat.
I know that statues cannot live,
But for their peace, my life I’d give.

In Faith, Hope, and Love,