Have you noticed how confusion and chaos are literally almost everywhere in the world? That’s because from nations, to countries, to states, to cities, to towns, and all the way down to small groups and individuals…human beings are looking for power, money, sex, and drugs. It boils down to the original sin…selfishness. When you have a need to be your own king, bam! You’ve just put the Creator of the universe on the back burner. And that won’t work.

Maybe it’ll help you to think of it this way…

You don’t get to make the rules, even though you can be your own king.

But here’s the good news…

The One who DOES get to make the rules is the only King who ever was, is, or will be who isn’t arbitrary and capricious. That’s good news for you and me because it means you can depend on Him. And it gets even better. He loves you. Want proof? How about the fact that He laid down His life for you so you could live forever with Him in Heaven? Sound like a fairy tale? Well, it isn’t. The evidence for this reality is enormous and overwhelming.

So, if you’re still trying to be your own king, I hope you’ll reconsider. Give up the responsibility for the universe…or even your own private universe. Give it over to the only One who can handle the heavy load. And give in to Jesus. Otherwise…

You Just Don’t Get It

Well you idolize with your idle eyes
Your body wants what it wants, and you let it
You identify what you deify
Youâ€™ll see the kingdom, but you just donâ€™t get it

You canâ€™t submit to any higher will
Youâ€™d rather live in the dark
Well, you can have exactly what you say
Look where youâ€™re making your mark

Donâ€™t you think you should think about it
Do you know all there is to know
Thereâ€™s a choice; you canâ€™t live without it
You can be sure where youâ€™re gonna go…

Tune In On iTunes Email | RSS 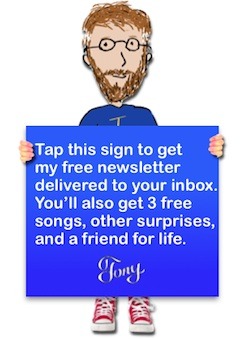