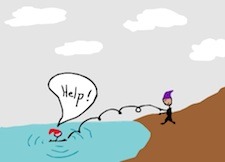 An unselfish life is not illustrated and/or perpetuated in evolution.

Altruism is defined in the dictionary as the “selfless concern for the well-being of others”. It’s very cool that we can even observe different species concerned for the well-being of other species. We all love to hear the story of the dog who saved its master who fell in the frozen lake. Or the story of a mother cat who nursed a stray guinea pig in addition to her kittens. And of course, we love to hear the stories of courage when people are saved from burning buildings, car crashes, and natural disasters.

But how in the world do those selfless acts tie in with “survival of the fittest”…or the perpetuation of the species or as Darwin wrote in his famous book “preservation of favoured races in the struggle for life”?

If you cling to an evolutionary worldview, you’re holding onto a rope with no one and nothing at the other end to pull you from the quicksand. Ironically, if anyone did show up to pull you in, it wouldn’t be because they felt a strong need to perpetuate the species. No, they’d be responding to that still, small voice inside them…that message written on the tablet of their heart…that this is the RIGHT thing to do.

But it isn’t true. It’s a pitiful, untenable worldview that seeks to thumb its nose and shake its fist in the face of God. If you’re still clinging to the hope that you can be your own god, believe me…you will be…forever. But I don’t think you’re gonna like it. Please reconsider.

In Faith, Hope, and Loveâ€¦