Yes…Even Singer Songwriters Can Have A Train of Thought

Check out the lyrics to my song “Train of Thought”… 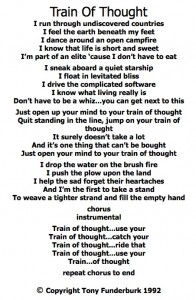 This song came about because I had some music going on in my head but at first I couldn’t think of what I wanted to say.

I kept going through some of my usual idea starter techniques I use, but they weren’t working. I got a phone call from a friend who asked what I was doing. I said I was trying to get a song going, but I just couldn’t get a good train of thought started. It wasn’t until I got off the phone that the idea for the title popped into my head. And it fit in just right with the music I had already started. Then words started to flow, and the rest was a blast.

Oddly enough, the first couple of lines were inspired by a Star Trek movie. Real fans of that movie series will remember Star Trek VI: Undiscovered Country. And the theme behind the movie got me off and running. I thought a comparison between heaven and earth would be a cool thing to write metaphorically about. So, I set out to write a clear, yet possibly incomprehensible train of thought from the perspective of actually being that train of thought. Does that make sense? Well, it did to me for some reason. So I just kept at it as the words flowed. Soon I had a train of thought song.

Think about it…what can dance around an open campfire, sneak aboard a starship, drive software, weave, fill, help, drop, etc. and doesn’t even need to eat?

Your support means the world to me”truly. Please consider buying some of my original music, music for kids, and lullaby songs.