Back in 1989 I wrote a bunch…and I mean a bunch of songs. I was a singer songwriter on a mission to get all of the ideas out of my head that I could in a year. Almost all of them were only recorded on old analog 4 track gear, and I’ve never gotten around to re-recording, remixing, and re-mastering them. I think I will work on some of them and get them into my digital Logic studio. But, for now, the only place anyone will hear them is through my email subscriber list. (hint hint) Just go up there to the “Join Now” button, so you’ll be sure and get in on these crummy recordings before I polish them up.  🙂

By the way…I’m not just giving away old analog music. I’ve been giving away a lot of free music to my subscribers. Even though you missed out on the ones I already sent, it doesn’t mean you have to miss any more subscriber-only releases or versions. And I’d love to get your feedback anytime a song strikes a chord…or hurts your ears.

Here’s this week’s Friday Freefer. It’s a song I wrote because some Hispanic friends of mine asked me to write one with Spanish lyrics. Since I don’t really know Spanish, I compromised and wrote the chorus in Spanish. Please enjoy… 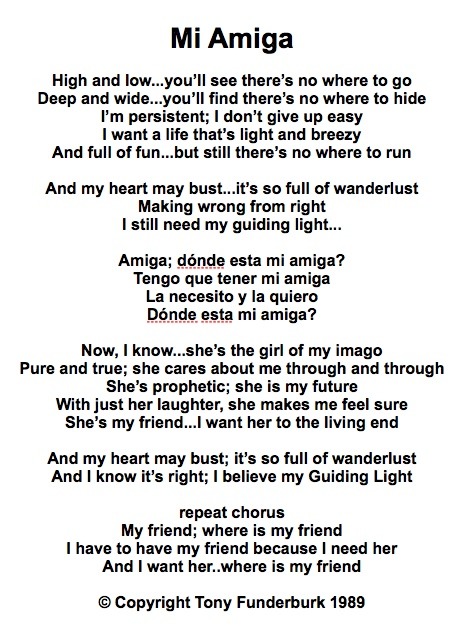