Can you imagine a world with no hatred? The problem is…currently it can only be imagined. It doesn’t exist except in the mind of dreamers, visionaries, and those who refuse to see reality. And it appears that mankind will remain on a crash course with destruction until the Light of the World appears. 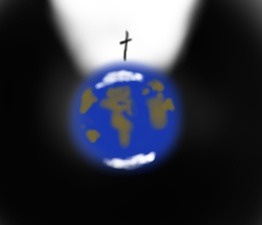 For those of you who’ve been living in a remote cave in the jungles of the Amazon (not the bookseller) I’m talking about Jesus. “Light of the World” is a term He used to describe Himself. Do those sound like the words a sane man would use? Do they sound like the words just some ordinary “nice guy” would use? The answer to both of those questions is “no”. But…

Jesus could call Himself the “light of the world” because He IS. And He’s not just some ordinary “nice guy”. He’s the One who forever past and future IS God, the Son. He took on human flesh about 2,000 years ago, and now He’s also forever a man. I don’t think even most Christians realize what an eternal sacrifice that was for Him. In order for those who love Him to have eternal life, Jesus had to become a man, suffer the punishment for all sin, die, and rise up again to eternal life. He had to be willing to forever divulge Himself of His non-corporeal existence and be like us. Can you imagine the depth and fullness of the love it took to make that sacrifice? Me neither.

Here’s the sad kicker…even though God “so loved the world that He gave His only begotten Son, that whoever believes in Him should not perish but have everlasting life” the world does not love Him back. Not anywhere near it. That’s not to say individuals don’t love Him. I do. Millions do. But not the world as a whole. Most of them still hate Him and despise his “rules”. They want no part of a “ruler God” who “demands to be loved”.

Well, I don’t know about you, but I don’t need demands to coerce me into loving a God who would make the ultimate sacrifice for His creation. Talking to His disciples He said, “Greater love has no one than this, than to lay down one’s life for his friends”. These weren’t lip service to an ideal. He lived and died according to His Word. So, if He calls Himself “Light of the World”, then I hope and pray I can do my part to flip the switch for as many as possible.