Is it just me? Or have you noticed how dark, dreary, and ominous things have gotten? Even here in America where the light of truth once shone brightest…everything is going dark. Movies, music, billboards, the internet…all filled with shadowed images and references. What do you think the attraction is with this downward spiral into a bottomless pit? Whatever it is, we shouldn’t embrace a fatalistic attitude. And we certainly shouldn’t toss in the towel. Because no matter what, eventually darkness falls, and the Light will banish it forever. 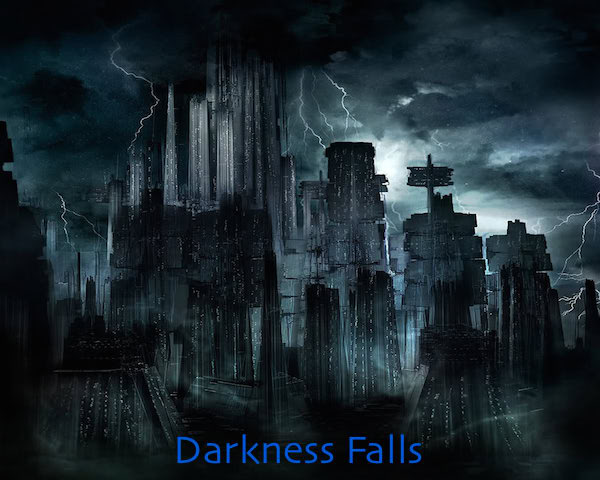 It’s not that I think the world is, to borrow a couple of well-known metaphors, “a bed of roses” or “the land of milk and honey”. Far from it. But I believe we get the world we build. It hasn’t been predetermined by God or any dark forces of evil to be filled with darkness. We make it that way. We…the members of the human race as a group. But…

There are groups who are doing what they can to turn the tide, to reverse the trend toward destruction. I count myself in that camp. And I’m no angel. I’ve messed up more times than I can count, and I’m sure I’ll mess up some more. But a perfect person only lived on this planet once. Guess what He said about me? And you…

…we are “more than conquerors“.

Wouldn’t you prefer a bright, sunny, colorful world where imagination soars toward rainbows of light? Doesn’t that sound more refreshing than skulls and crossbones and zombies and mutation freaks?

Again…is it just me? Or is there anyone out there who’d also like to see to it that darkness falls once and for all. If so, c’mon…let’s…

Oh, can you imagine…
if we were all singing the same song,
Would we still be living this way?