Back in 2003 I wrote and produced some music for a corporation’s annual awards party. They were putting together a Mardi Gras theme and wanted some fun music to go along with it. Along with some “well-known” stuff they found, they thought two or three humorous and sardonic songs might be the ticket.

So I wrote “Crazy Mama’s So Mean” about a fictitious woman who’s just plain mean and spiteful. There’s just no pleasing her. Like a couple of lines say “she don’t take no for an answer…but then again she don’t take yes”. It’s sort of the story of “Hard Headed Woman” moves to Nawlins.  🙂

here are the lyrics… 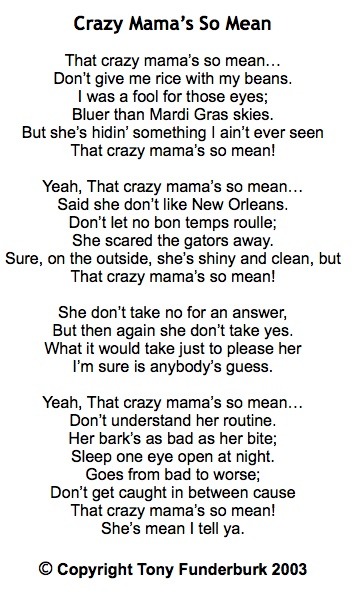