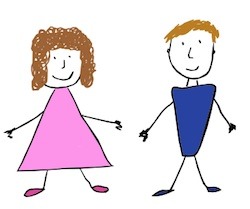 As a kid, I had a vivid imagination, and I loved to spend time in my own little world of make believe. I don’t think that makes me unique at all. I’m sure just about every kid enjoys conjuring up images of flying ponies or personal rocket ships or invisible friends.

It’s good to have an imagination. You’ve probably heard some people say “go ahead and have your castles in the air…just be sure to build a foundation under them”. I believe that, too. If you’re gonna dream, dream big. In the story of Don Quixote we learn about dreaming the “impossible dream”. As a kid, it’s much easier to dream the impossible because you don’t yet have so much harsh reality squelching you.

But as an adult, maybe you begin to falter in your quest for the impossible dream. Maybe you come to realize there’s no such thing as a flying pony. Then, your heart sinks, and your mind begins to focus on the day-to-day tasks…making a living, taking care of a family or household, paying the bills.

Those so called “day-to-day” tasks are vitally important, and the Apostle Paul, in the Bible, admonishes us with his letter to “put away childish things” when we become adults. So, it’s good to embrace the reality of how the world truly works. It doesn’t mean you have to give up or throw away your imagination. It just means you can’t live in that make believe world anymore. However, this world has so much brightly colored, multi-textured, and glorious sensuous reality you don’t need to make believe to behold it.

You’ve been given a great, big, beautiful, blue planet with everything your body needs to survive and thrive. God gives you day and night, light and dark, feelings and intellect, and you have the freedom to explore the wonders of the world. And you can pursue the passion in your heart and mind…at least when you don’t make believe it all just happened by chance. When you reach that level of make believe, you’re denying the existence of the only One who gives any meaning to your life.

As a kid of thirteen I asked Jesus to come into my heart. He did. And even though I didn’t live a completely moral and exemplary life, I knew He’d never leave me nor forsake me. I don’t have to make believe He loves me or that He’s made a place for me to live with Him forever. And though I put away childish things when I became a man, I’m still a child of the Living God. You can be, too. Don’t put it off till tomorrow…tomorrow may be too late.