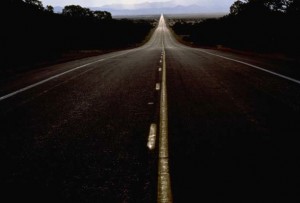 OK…it was bad enough that I had approximately 28 hours to get from southern Texas to Grand Rapids, Minnesota. (and yes, I do mean Minnesota, not Michigan…it’s where “Dorothy” aka Judy Garland was from…how’s that for adding color to road stories?)

But as we were heading into Minnesota (in January) it was getting colder and colder by the minute and mile. So cold, in fact, that the heater in my Toyota pickup didn’t seem to be heating. We finally made a stop in the outskirts of Duluth for gas. It was about 2 a.m. When I went inside to pay, the clerk told me the temperature was about -35 degrees…fahrenheit. And that wasn’t windchill…that was actual temperature. Yikes. I got a piece of cardboard to put in front of the radiator. It helped the heater to heat up the cab of my truck to less than deathly freezing.

A bit further up the road (and away from any town) the truck stalled out. Mind you it’s late Saturday night / early Sunday morning…in the middle of nowhere…in Minnesota…in January…in sub-zero temps. I thought to myself: “Hmm…thank goodness I bought those peanut M&M’s back there.”

Not! I thought something more like “Hmm…I would never have dreamed this is where my life would end.”  🙂

Well, as you might have figured out by now, my life didn’t end there that night. Just when you think the world is void of good samaritans; one shows up like an angel from Heaven. A very nice guy who said…

“You’re lucky, man. I work overnights, but I don’t typically go in on Sundays. I was fillin’ in today.”

He knew of a place where I could pull my truck inside and “warm it up a bit”. And he graciously towed me there and wouldn’t accept payment. The good news is that the only problem I had was frozen water vapor in the carb. And when the truck warmed up and melted the frozen stuff, it started right up.

We made it the rest of the way to Grand Rapids. I bought a magnetic engine heater and plugged it into the outside receptacle at the hotel for the entire two weeks of our stay. Worked like a charm. Wish the crowds would have been more like the friendly folks of munchkin land. Oh well, you win some…etc.