If You’re A Singer Songwriter With Road Experience… 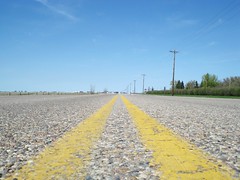 …then you’ve probably got Road Stories

Here’s one of mine…

After a long, almost 24 hour drive from Kansas to South Carolina, we pulled into the hotel where we’d be staying and playing. Luckily we had the rest of the day and night before we started. So, we caught up on sleep that evening. And the next day I needed to get a document notarized. We went to the town hall where a notary public had been recommended. I asked a guy if I could get my document notarized. He asked me what the document was. I asked him why he needed to know, and I promptly got the in-the-movies-southern-good-ol’-boy third degree…

“Boy!” he exclaimed, “we don’t appreciate smart aleck long hair types like you around here.”

I would have thought it was a joke, but he didn’t have a smile within a hundred miles of his face.

And we went to a convenience store to ask where else a notary public might be. One was pointed out to me by the clerk who seemed to have the same high opinion of me I’d just experienced at the town hall. But we ignored the lack of pleasantries and walked a a few blocks to the other office. I hope I’m not being politically incorrect when I say this… A very nice black lady came to the front of the office and said she was the notary public and that she’d be glad to notarize the document for me. It took about a minute, cost less than $5, and it was all done with smiles and kindness. Nice change…what a concept.

Later that night, after the evening’s worth of music had been played, we were out for a walk in front of the motel when the owner drove up to us. “What are ya’ll doin’ out here?” he asked.

“Just goin’ for a walk before we go to bed.” I replied.

“Well, I suggest you just go on to your room. You don’t need to be out here without something like this…” and he pointed to a gun he had in his car’s console. “People end up shot or missin’ if they’re out too late.”

So, we opted to go to bed. The next day, sure enough, we heard a report of a killing in a field not far from our room and the motel. Yikes.

We played that establishment for 2 weeks before moving on to our next stop. It felt like 2 months. Pitch black walls, some guy in the back making wolf calls almost every night, and smoke so thick you could see pillars of it from the canister lighting. This story is true, so I’ll keep the name of the town and its people anonymous to protect the innocent…if there were any.

Ain’t Got Nothin’ Over Me